On the Road to Manzanar 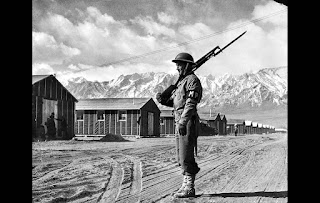 Ahmose, Gregory, Bernie, and Mondo Katou sat in a circle, holding hands. The image of a dirt road on an arid landscape appeared on one of the view screens. It grew more distinct until it appeared to lead right into the base.

“Come on,” Bernie ordered. “This is our chance.”

“Ahmose, you don’t have to trust me, but we do have to be of a mind when it comes to getting ourselves out of this quandary,” Katou pleaded. “I’m truly sorry for the terrible things that I did back at Manzanar. I understand why you find it difficult to put your faith in me. So, may I suggest that you don’t put your faith in me, but instead, we make a bargain to work as a team until we are reunited with your other companions. At that point, I will accept whatever you feel is a fitting punishment for the troubles I’ve caused in your life.”

“He’s telling the truth about wanting to help us, Ahmose,” Gregory interjected.

“Agreed,” Bernie said. “Repercussions for his past actions can wait till later. We need to be as one to keep this wormhole open so we can pass through.”

“Very well,” he said. “For the purpose of this mission, I agree to work in tandem with you. I want to bring Theodoric back and to find our companions if possible. Our goals are in alignment. But you have much to answer for, Katou. You are responsible for a great deal of misery in all of our lives.”

“Agreed. I hope that during this mission I can show you that I am truly sorry for my past actions and that while you may never see me as a brother or a friend, you might at least come to see me as an ally. I swear to work in alignment with and protect each of you.”

The road again became cohesive. The quartet stepped onto it, and the control room disappeared.

“Well, here we are on the road to Hell,” Ahmose observed. “Do you think it’s wise for us to be out in the open like this? We’re three Japs walking along holding hands with a white guy between us in a very racist and homophobic era. You can well believe there was a buttload of buggery going on behind the scenes, but Gods forbid that any of the macho white saviors paying for a piece of Asian ass admit that he had the hots for Tom, Dick, and Harry rather than Thelma, Louise, and Mary. I think a good quarter of the camp guards preferred dick to pussy and at least another quarter of them was willing to fuck any hole regardless of who or what it was attached to.”

“I don’t care whether this is wise or not,” Bernie declared, wrapping his arms around Ahmose. “I love you so much and I know you’re hurting so bad right now. You never talk about Manzanar, and I’ve never pushed you to talk about it because I know it’s still an open wound 75 years later.”