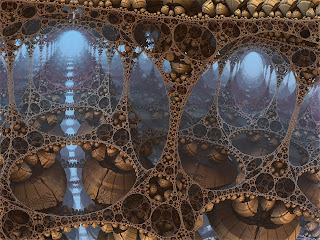 Image by Pete Linforth from Pixabay

Norman and Sarah walked to the top of a small hill. Norman scanned for metal in the hopes of finding another access port and, hopefully, food and water for Sarah. The android looked momentarily puzzled.
“What is it, Norman?” Sarah asked. “Can I do anything to help?”
“Not at the moment, Sarah,” Norman replied. “I was momentarily stymied, as I believed I would be scanning for metal versus organic material. However, I will have to adjust my sensors to scan for a specific type of metal instead.”
“Why?” Sarah inquired, suddenly feeling as if she might scream at any minute.
“Because everything beneath the surface layer of this sphere is metal, so scanning for metal was as if I had gone anosmic and was attempting to sniff for food. It was as if all the food suddenly smelled like gelatin.”
“Why do you suppose everything under the surface of this planet is metal?” Sarah wondered.
“I do not think this is a planet at all. I believe it is some sort of space station which has been terraformed and given an atmosphere in order to make it appear to be a planet. The effect is Barmecidal once one realizes the truth.”
“Do you suppose it was designed by the same inept technicians who built a scientific base inside a dormant volcano only to have it break apart and, hopefully, send its occupants on an astrovagant journey rather than having them burn up in a flood of molten lava?”
“I sense similarities in the construction of this station and Base Lust-69. Please do not be afraid, Sarah. It is my intention that we shall converge with our companions who were sent on other trajectories. I will work tirelessly towards this goal and, surely, it shall be accomplished.”
“I’m not sure that can happen, Norman. We don’t even know where we are.”
“We will find out, just as soon as I acquire you some food and water. Together we will work towards this goal, Sarah. Between my computational and processing software and your intelligence, we are certain to discover a solution.
Sarah’s eyes welled up with tears.
“I’m afraid I’ll never see Julie or Dale or Marc again, and you’re trying to put rose-colored glasses on my eyes and blind me to the truth!” Sarah snapped. “If you really think that we can find a way to reunite with our companions, then do it! Prove me wrong, don’t tell me another lie. Please!”
Norman located another access door. This one had stripes painted on it.
“If I had a shovel, maybe I could help you get in,” Sarah suggested, feeling bad about snapping at Norman.
“It is secured with a titanium lock,” Norman noted. “In order to best breach the lock, I will need to make it cold. This should make the tumblers more responsive to my pick.”
“Norman, I think I hear water running,” Sarah stated. “I’m going to go see.”
“Sarah, a moment! I nearly have the lock breached! Please, I advise you not to go anywhere without me in this unknown territory!”
Ignoring Norman’s warning and her previous training dating all the way back to her days as a Brownie, Sarah capered down the hill with a manic grin lighting up her face. She stopped at the edge of a glistening stream so clear that she could see the sunlight glancing off what appeared to be emeralds embedded in the sand. Sarah was terribly thirsty. She cupped her hands and drank.
“Sarah, I’ve found something incredible!” Norman announced as he hurried down the hill. “Quickly, you must come and see!”
Sarah suddenly leaped up, assuming an exaggerated martial arts stance.
“Who are you, Metal Man?” she demanded.
“Oh dear,” Norman sighed, sticking his finger into the stream and running an analysis. “Well, at least the water isn’t poison and the effects should wear off in a couple of hours. This is fairy water. It should have a similar effect to psilocybin, which does not explain your sudden display of fear and aggression towards me. Oh…but this might. You ate a piece of this necro-mushroom, did you not?”
“What’s it to you, you metal wise guy?” Sarah sneered, approaching Norman and poking her finger against his chest. “There’s nothing you can do to me! Oh, you thought I was dead when you and your crew of titanium thugs mowed me down during that home invasion, but the savvy scientists at Base Lust-69 rebuilt me, and now I’m fucking bullet-proof! Nobody puts Sarah Swallows in a corner! Try anything and I’ll put you on the scrap heap, you rust bucket!”
Norman scanned his database and, although Sarah was something of an enigma, he found nothing to confirm the home invasion that she alluded to, and he was already aware that her body contained no bullet-proof material of any kind. He reached his hand towards her.
“If I had any desire to harm you, I’d obviously have reason to fear your retaliation,” Norman said. “However, I am here to help you. I assure you I was not involved in the home invasion you describe. The first time you encountered me was at Base Lust-69. I am your friend, Sarah. It is my top priority to ensure your safety. I assisted you in escaping when the base collapsed, and now it is my mission to assist you in reuniting with your companions. I believe I may have found a way to access the various components of this space station. Won’t you come with me? When your mind is back to its normal functioning, you will be able to assist me.”
“Very well, you certainly don’t seem like the sort who would break in and blow innocent people away,” Sarah agreed, although she continued to regard Norman with suspicion.

1. Who Are You
2. Break Apart
3. Water
4. Anosmic- absence or loss of the sense of smell
5. Stripes
6. Scream
7. Shovel
8. Barmecidal- giving only the illusion of plenty; illusory:
9. Station
10. Help
11. Converge
12. Specific
Gelatin
Prove me wrong, don’t tell me another lie. Please..
ASTROVAGANT
[adjective]
travelling through space; traverse through stars.
top