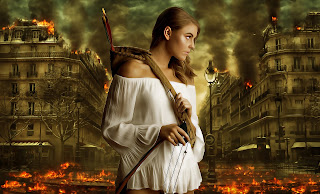 Image by Enrique Meseguer from Pixabay

Note:
The final prompt in the November PAD Chapbook Challenge was "The End." I was inspired to write a poem for Team Netherworld's long-running WIP, Fetch.

The reincarnation sequence of the Fetch story was born because I had long wanted to write a backstory for the third season original Star Trek episode The Lights of Zetar. This episode tends to be pretty much universally panned, and it certainly has its flaws, i.e. if Captain Kirk had referred to a grown-ass woman in her 30s as "the girl" one more time, I swore I was going to jump through the screen and make him wear his 'nads for earrings, but I was fascinated and, frankly, terrified by the malevolent light colony. It provided me many years of nightmares. To this day, even as desensitized as I am to most so-called horror (which generally consists of gore and jump-scares), I still cannot watch this episode in the dark.