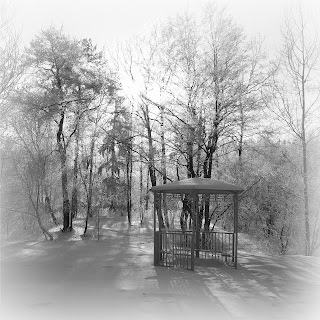 Image by Alex Kovalerov from Pixabay

Full critique okay, so long as you use the Hamburger Method. Medium well with mustard is nice, and I'll have fries and an unsweetened iced tea with that.

I know that Jimmy Buffett likes his burgers medium rare with mustard, but this is a point on which Jimmy and I differ. I like my meat thoroughly cooked.

When Dr. Alberta Wilmarth, the Dean of the Miskatonic Department of Archaeology approached Andre Linden to renovate the old Curran Mansion on behalf of the University, he gladly accepted. The one-time thief hoped that having his name attached to the project would attract clients to his struggling construction company. Andre had served one year of a five-year sentence twelve years previously after being caught robbing an import warehouse off Boston Harbor.

Andre had never committed any violent crimes, but being an ex-convict was still a strike against him. In a town like Arkham, everyone knew everyone else’s business. Nonetheless, Andre felt that his business stood a better chance of thriving in the upstate area of Massachusetts than the bustling anonymity of Boston.

Andre was forty-one years old, tall and lean with a chiseled, angular face and graying brown hair with a receding hairline. He sometimes noticed women glancing at him but was unsure if they were appreciating what they saw or just sizing him up.

Dr. Wilmarth hired Andre on Thanksgiving Eve. She hoped that the Curran Mansion could be pulled together enough for Miskatonic’s anthropology and archaeology departments to have their New Year’s Eve party there. Andre told the professor that he’d see what he could do. She was a nice woman and he was sure that she knew her stuff when it came to archaeology, but like most people outside of the industry, she was unaware of the holdups that red tape could cause when it came to even seemingly simple renovation projects.

Alone on Thanksgiving night and wanting to distract himself, Andre headed to the Curran Mansion to draw up a rough plan for the project. The power had been turned off long ago, but his powerful hand torch illuminated everything. At least on the main floor, although all was covered in a thick layer of dust, the structure seemed intact.

Andre was surprised by the sounds of laughter and celebration. He supposed that local kids might be using the old place to party and hoped that the appearance of a gruff-looking middle-aged man might be enough to scare them off. As he headed for the stairs, he noticed that the backyard was lit up bright as day. Curious, he hurried outside.

Andre found himself in the middle of a wedding reception. A striking blonde woman in a silky white gown approached him, smiling. He was struck by the sadness in her deep blue eyes and reduced to the social aptitude of a stammering adolescent when he attempted to apologize for intruding.

“H…hello, Ma’am. Andre…um…me. Uh…Andre Linden, I am, that is. Construction. Um…sorry. I didn’t know anyone was here. I came to fix a thing—um—things. How could I not have noticed that…”

“And you?” Andre inquired. “Surely such a lovely lady…”

Hazel’s shimmering laughter contrasted with the pain and fear in her eyes, and when she threw back her head in mirth, Andre noticed an angry red scar dotted with bumpy pockmarks marring her porcelain skin. Hazel collected herself and linked her arm in Andre’s.

“My fellow, Torrey, keeps pushing me to marry but I don’t know if I want to so soon,” Hazel confessed. “I’d like to live a bit before becoming a wife. Oh, Andre, I’m so glad you’re here. I hope that you can help me find something.”

“Of course,” Andre agreed, allowing Hazel to lead him into the house. “What are we looking for?”
“My pearl necklace,” Hazel explained. “Well, the remnants of it anyway. It was a gift from my old school chum Kenneth for my birthday. It was perfectly innocent—Ken is a man’s man if you take my meaning—but Torrey lost his senses and snatched it off my neck. He made such an ugly scene. Ken is truly a dear, and I felt just awful. I’d love to get the necklace repaired.”

“Do you remember where you lost the necklace, Hazel?” Andre asked as Hazel led him to the basement.

“It was over there,” Hazel said, pointing to the right corner of the back wall.

Andre felt as if someone had dragged a knife made of ice up his spine. Moisture had eroded the wooden floor and the wet earth bulged through the holes. A fetid odor permeated his nostrils. The light from his torch illuminated pearls dotting the soil.

A rusting shovel lay in the dirt. Andre picked it up and began digging like a man possessed. The shovel struck something hard. Andre continued digging until he had unearthed a skeleton. The remnants of a scarf were wrapped around the neck and pearls dotted the soil surrounding it. Strands of golden hair still attached to mummified skin were revealed as Andre pushed the soil away from the gruesome discovery.

Andre awoke in the hospital to see a worried Dr. Alberta Wilmarth at his bedside writing a note.

“Oh, Mr. Linden, whatever possessed you to go to that place alone at night?” she asked. “When they found you, you were nearly dead from hypothermia. It’s a good thing that woman flagged down the patrol car or you might well have frozen to death.”

“What woman?” Andre inquired, feeling the icy knife run up his spine again.

“Well, it’s a bit of a mystery,” Dr. Wilmarth replied. “Officer Chevalier told me that a glamorous blonde woman in a white party dress flagged him down at the end of the mansion’s driveway. She led him to the basement, and when he turned to speak with her, she’d disappeared.”

“Mr. Linden, you found the remains of Hazel Curran, who went missing on November 28, 1928,” she revealed. “What made you decide to dig there?”

“She did,” Andre revealed. “I followed the pearls from her necklace. They led me right to her grave.”

Miskatonic University is the creation of H.P. Lovecraft.
Dr. Alberta Wilmarth is a nod to Albert Wilmarth, the narrator in Lovecraft's 1931 tale, The Whisperer in Darkness. She is Albert's niece. 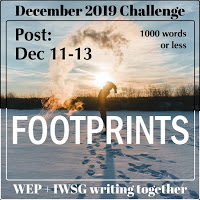 A Special Request:
I would not normally do this, but I need a little help. I am currently running a Battle of the Poems to choose which of my poems will go into the final document for the November PAD Chapbook Challenge. At this point, I only have one voter, the wonderful Elephant's Child.
All I need is for people to choose which poem they prefer of the two poems offered in each day's post. No critique is necessary although you can provide one if you want.
The battle is running all month on the Horror Harridans Writing Sisterhood blog. Please come vote!
- December 11, 2019
Email ThisBlogThis!Share to TwitterShare to FacebookShare to Pinterest
Labels: Battle of the Poems, Dr. Alberta Wilmarth, ghost stories, H.P. Lovecraft, horror stories, Miskatonic University, November PAD Chapbook Challenge, paranormal romance, shout-outs, WEP challenge, writing contests