Image by Camila Denleschi from Pixabay
Note:
This story is the first chapter of a WIP. I whipped it together over the past couple of days as I almost forgot about this month's challenge. I think I'd call it a third draft. I welcome suggestions for improvement as it is part of a piece that is still in the works, but ask you to please BE COURTEOUS when critiquing.
I know this piece is missing the background lore of Seacliffe Island and the Oceanview School. Since I intend to include this lore at a later point in the story, I didn't worry about incorporating it into this piece. I realize that this is a faux pas for a complete, 1000-word story, but I do not believe that it is a faux pas for an introductory chapter.
I also realize that I need to do more to reveal how the father concluded his daughter was a vampire. Not delving deeper into this lore is a choice made due to time constraints. I will endeavor to develop this plot point further before submitting the final piece to Dragon Soul Press for their Beautiful Darkness anthology or publishing the story myself.
https://dragonsoulpress.com/2022/01/01/upcoming-submission-calls-for-2022/
A content warning in triplicate for those who hate vampire stories:
This is a vampire story. It is a vampire story. Don't forget, it is a vampire story. If you don't want to read vampire stories, don't read this story. I'd rather receive no comment than a "I usually don't read vampire stories, here's why your vampire story sucks" comment. Such comments are unhelpful and irritating.
Spoiler: The vampires in this story don't sparkle.
Now that the introductory fol-de-rol is out of the way, let's get on with it.
Tagline:
A father realizes his daughter is not only dangerously troubled, she is no longer even human.

To Whoever Finds this Ledger

I suspect that my daughter Harriet murdered her friend Charity Dye on Halloween night, 1930. She and Charity were both fond of their international studies instructor, Miss Khaing Krauss. Miss Krauss was the daughter of the Prussian rail baron Shemuel Krauss and his Viennese/Chinese wife, Zhen. She was well-traveled and enjoyed sharing her adventures with her pupils.

Harriet began imagining wrongdoing where there was none. She convinced herself that Charity, wishing to be the favorite pupil, told Miss Krauss lies about her.

I spoke to Miss Krauss before she left the Oceanside School. With my promise that I would take no action against her, she admitted she thinks Harriet may be involved in poor Charity’s disappearance.

“Please, Mr. Meadows, I beg you not to repeat my words to your daughter or your wife,” Miss Krauss insisted. “If you do, I am doomed. I fear for the safety of any girl who crosses your daughter. As for your wife, surely you know she would do anything to protect Harriet.”

Six months later, I learned from Miss Krauss’ father that she died from a ruptured appendix shortly after her return home. I found an effigy of Miss Krauss in a miniature coffin on my wife’s vanity table. The effigy had a hatpin stuck in its abdomen.

When Harriet went off to Hunter College in New York, I hoped that pursuing a higher education alongside other intelligent young women would calm her fiery disposition. I put the disappearance of Charity Dye out of my mind and chalked up Miss Krauss’ untimely death to coincidence.

The frequency of Harriet’s letters dwindled in the autumn of 1932. It displeased me to learn that the reason for her distraction was a young man with whom she had become acquainted.

Harriet wrote to me, disclosing that she had moved off campus to assist the growing homeless population of New York alongside the object of her affections. While her aim appeared laudable, I was concerned that she might fall pregnant only to be abandoned by her paramour.

As if to reassure me that she was in competent hands, Harriet sent me a photograph of the enigmatic Saroj Tremblay. He was the embodiment of the tall, dark, and handsome stranger prognosticated by fortune tellers to romantic-minded young women. Possessing a visual representation of the swarthy swain did nothing to assuage my anxiety.

Harriet returned to Oceanview alone at the beginning of the fall semester this year. She remains sequestered in her room during the day and spirits herself away when night falls. I suppose she might take the ferry to Virginia Beach, although Seacliffe Island has its own nightlife.

Following a series of disappearances, I admonished Harriet not to leave the house alone. I sat in the hallway outside her door, reading. Each time she opened the door, there I was. Harriet seemed more amused than angry. She looked into my eyes, and I became paralyzed.

“I could leave if I wanted to, Father, but I think you need to be taught a lesson,” she said. “What happens next is on your hands.”

I woke in my study shortly before dawn, curled up on the oversized ottoman like a cat. Fortunately, none of the students were stirring yet. I went to my private toilet and pulled myself together, then proceeded to the kitchen.

I thanked God, if God there is, for my electric coffee percolator and pop-up toaster. I made a mental note to tell Handy Hans Longstaff to thank his wife for the delightful quince jam. Feeling bolstered, I began my morning walkthrough of the property.

I found the body of Oceanview’s literature instructor, Miss Alannis Breiner, beside the boiler in the basement. Blood stained the collar of her violet night dress. Her long golden-brown hair was fanned out around her horrified face. Her regal blue eyes stared at nothing. Her blanched skin felt like cold marble. It was then that I noticed the bite mark on her neck.

Police Chief Plato Gordana confirmed that a human assailant made the bite, noting that the attacker must have been wearing prosthetic fangs.

“Poor girl musta thought she was letting Rudolph Valentino in, but it was actually Count Dracula,” he mused as he examined the injury. “Huh. Curiouser and curiouser.”

“Well, either our Count was a good deal smaller than that tall Hungarian fella who played him in the movie, or our Count is a Countess. A man’s mouth is larger than a woman’s mouth on average, and a man exerts more force when he bites.”

Gordana reassured me he didn’t believe we were dealing with a real vampire, only a maniac pretending to be one. He had no explanation for where the exsanguinated Miss Breiner’s blood had gone, as only a scant amount was spilled.

“I suppose the sicko might have drunk it or maybe bottled it up,” he said. “A few bodies turned up drained of blood while I was still in New York back in ’32. I’ll get in touch with the NYPD. It don’t look like anyone broke in, so I’m guessing the lady opened the door for ‘em.”

“Do you think it was someone she knew?”

“Could have been, although folks will generally let a woman in, ‘specially if she appears to be in distress.”

I appreciated Chief Gordana’s attempt to comfort me, but I knew who the assailant was. May God, if God there is, forgive me for what I must do.

If you have found this letter, it means I have failed in my objective. I beg of you to heed my warning. Oceanview School must never be reopened. What lies within her foundations is something worse than death. 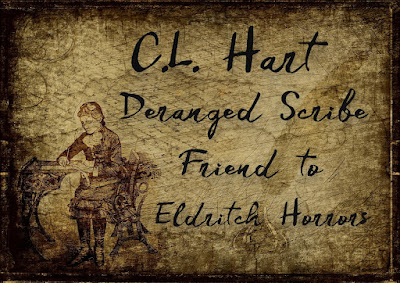 C.L. Hart calling card made by me using design software from pixlr.com 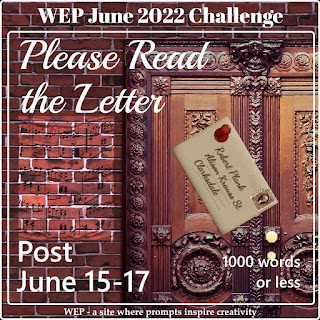