Love, Lust, and Lunacy is Live and Free for a Limited Time! 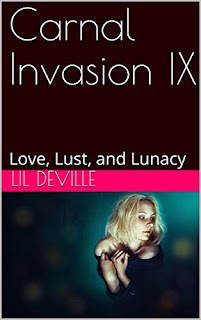 The ninth book in the Carnal Invasion series is entitled Love, Lust, and Lunacy, and it is the most intricate and powerful of the Carnal Invasion tales to date. Vampire Tobias Walton, the megalomaniac head of the mysterious Xquenda Industries shows just how far he'll go to get what he wants, and the depths of his wrath know no bounds when he's deprived.
The defiant attitude of Felice Navidad, Queen of the Frost Elementals, ensures that she is the target of Tobias' ire. Can there be any saving Felice from Tobias' devastating assault?
Sonny Walton seeks aid and comfort from the lusty Gamma Iridian denizens of Climax Castle. The brilliant scientific mind of Mistress Kali devises what seems to be a fool-proof solution to the Tobias problem, but Tobias has unforeseen abilities at his disposal. Will Mistress Kali be able to stop Tobias, or will she be too distracted by the possibility of erotic energy exchange with an always-ready multitude of willing partners to take proper precautions to securely imprison the wily Tobias?
Meanwhile, in the Winter Kingdom, the love between Sonny's former partner, Ambrosia Luna, and Teacake, the tiny but brave snow elf prince, continues to grow while unsettling revelations about a devastating former incarnation on a doomed world are brought to light. Will Teacake's love prove to be enough to soothe the disquiet in Ambrosia's soul, or will her fear of being hurt again cause her to risk losing the love she's found in this magical place?
Team Netherworld's longstanding antagonist, the powerful witch Yadira Root, makes her debut into the Carnal Invasion universe in this novel. Will Yadira help or hinder the protagonists as terrifying truths are revealed?
This intricate and exciting erotic paranormal adventure can be yours free of charge between February 21 and February 26, 2019. Hurry and claim your copy today!