You'd Be A Fool to Pass up Free--Especially When It's This Good! 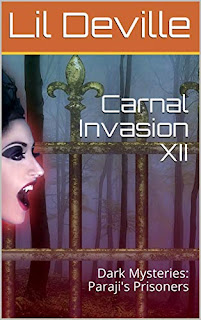 It's hot off the presses, and it's running wild! Carnal Invasion XII: Paraji's Prisoners is the first installment in Carnal Invasion's Dark Mysteries series.
Meet Paraji, a badass Rakshesha (female Rakshasa in human form) with a vendetta. Paraji and Mistress Kali had a past connection, and things didn't end well. Now the scorned sorceress wants revenge, and she doesn't care who she has to take down to get it.
Paraji has partnered with Captain Abigail Botterill, the corrupt director of the Alien and Supernatural Search Squadron. When rogue agents Dale Dicking, Marc Cumming, Julie Spitz, and Sarah Swallows are captured by Paraji's Djinn lackeys and taken to Base Lust-69, Julie has strange feelings of deja vu, although she can't recall ever having been to the base previously.
An old enemy of Ahmose Ike's from his days as a prisoner at the Manzanar Internment Camp has resurfaced and is working in conjunction with the two villainesses. Bad-tempered vampire Mondo Katou wants revenge on Ahmose and will stop at nothing to get it.
Will Mistress Kali's no-nonsense Gargoyle warrior daughter Titania and her lusty sisters be able to convince the randy Djinn guards to let them into Base Lust-69, or are the prisoners screwed in all the wrong ways?
Paraji's Prisoners may just be the most thrilling, mysterious, and over-the-top erotic installment to date in the Carnal Invasion Series!
Whether you like erotica with a generous side of plot, a story that keeps you on the edge of your seat, fun characters, a wicked sense of humor, or all of the above, you can't go wrong when you pick up your FREE copy of Paraji's Prisoners. But hurry--this deal is only available between May 27 and May 31, 2019.