First Chapter Friday: Gettin' Down on the Farm: Meeting His Dream Girl Plus Upcoming Promo 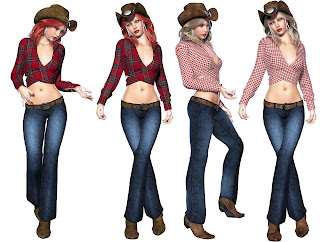 Welcome to First Chapter Friday, a semi-regular feature here at Naughty Netherworld Press. I'd like to give all of you the chance to share links to a first chapter or snippet from either a WIP or a published work, or you can share a flash fiction or artwork. Fanfiction and original characters are both welcome. Just leave a link in the comments and I will visit. Please visit the other links, too, and let's see if we can give this thing some legs!

I'm very excited to announce the release of The Carnal Invasion Collection Volume I: Short and Sexy, which contains the first four Carnal Invasion stories. Gettin' Down on the Farm is the second book in the Carnal Invasion series. I will provide purchase links following the chapter. Now, get ready to meet Frank and Jenny!

Frank Hamilton had no idea how a life could change in the blink of an eye, until the night he met Jenny in the parking lot at Tasker’s Roadhouse. Jenny was every red-blooded cowboy’s dream with her big blonde hair, peaches-and-cream complexion, and her long and slim but curvaceous body. The lonely twenty-one-year-old rodeo rider quickly fell under the spell of the lavender-eyed beauty.
However, Jenny was more than met the eye. Frank quickly became her servant in ways he could not have possibly imagined. The embodiment of his fantasies turned out to not be human at all. She was a shape-shifting alien from a planet called Gamma Iridon and she needed energy, and lots of it, to maintain her new form. The most readily available and powerful energy on Earth was sexual energy.
Jenny wasted no time revealing the truth about herself to Frank. The invasion force targeting Earth had been wiped out by unexpected space junk. A few pods were released, which fell in various locations across the planet. Jenny wondered if Frank would help her. Looking into her hypnotic lavender eyes, his mind was filled with visions of this impossibly perfect woman pleasing him in amazing ways, and he agreed immediately to assist her.
Frank realized that there was no way his services would be enough for Jenny. He had always prided himself on not being the jealous type. He was a good-looking guy, the epitome of the all-American boy. He stood six foot one, had a lean but muscular build with biceps that the girls just loved to squeeze and defined chest and abs that were the result of disciplined daily training. He had wavy blond hair, dark blue eyes, and even when his peers were struggling with acne during adolescence, he had remained remarkably clear-skinned. Frank Hamilton was all that, but he could never be enough for the woman he couldn’t get enough of.
“You will always be my number one, but there is no way you can be the only one, Frank,” Jenny cautioned on their first night together.
“That’s all right, Darlin’,” Frank said confidently. “I ain’t a jealous guy. You’re one hell of a woman. I know there’s no way one man could keep up with you. You can tango with other fellas. Hell, it’s a little kinky, but it might even turn me on to watch. Just don’t never forget who’s taking you home. I’ve waited all my life for a girl like you, Jenny. I’m willing to sacrifice a little to make you happy.”
Sometimes those words were accurate. But sometimes Frank was overwhelmed with just how much energy Jenny needed every day.

The Carnal Invasion series features a group of naive yet naughty shape-shifting aliens who need large amounts of energy to maintain their Earthly forms. The quickest way to get the energy they need is sex, and lots of it.

The Links
I will be featuring a free five-day Kindle promo for the book starting 25 August 2020. But if you don't want to wait that long, here are the purchase links. 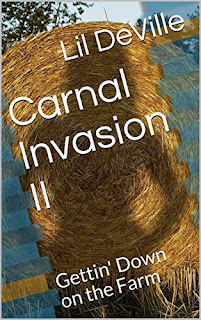 You can purchase Gettin' Down on the Farm on its own from Kindle for 99 cents.
https://amzn.to/3gkOQAW

This post was published on 21 August 2020 to these platforms: