Thirsty Thursday: A Journey to Xura 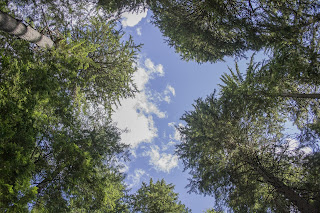 Image by M. Maggs from Pixabay
The sight that Robin and John saw on their arrival in the Dreamlands looked a little bit something like this.

The Adventures of Robin Roberts and Little John Tamboli: A Journey to Xura

“Are you comin’ tonight?”

A burly ghoul wearing a faded green and brown checked newsboy cap, a tattered gray cable-knit sweater over a threadbare collared shirt, and ragged brown trousers sat on a filthy futon in a cavern crafted by ghoulish hands beneath London’s Royal Horseguards Hotel. He had a map and a musty old tome in front of him, which he was studying by the light of a dim lantern. A Victrola sat in the corner, playing “Nearer My God to Thee.”

The large chap glanced up from the tome to see a diminutive ghoul clad in a reddish-brown newsboy cap, a gray sweater over a collared shirt, and a pair of ragged blue trousers. This was the same outfit that Robin Roberts wore every day, the same outfit that he had been wearing on the day he and John were placed in the mass grave in Crouch End on the 8th of June, 1918.

“Aw, Rob, mightn’t we Scapa Fla ter the bloomin' carnival anovver night?” John pleaded. “It’s been there since afore we were even a thought, and it ain’t likely ter disappear anytime soon.”

“You’ve been sayin’ that fer a fortnight,” Robin countered, taking the needle from the record. “Why're ya listenin’ ter this maudlin dirge? At least pop on a bit of ragtime or sum sha tunes, summit a chap can snap ‘is Longers & Lingers ter.”

“Cause those kinds of tunes will make me plates of meat set ter tappin', and then I won't get aahhht done. Ya kna that I Kathy Burke Mae West chicken pen I earwig ter melancholy music. Anyways, that's the bloomin' last Ding-Dong that the band played aboard the Titanic ‘fore she sunk ter the bottom of Davy Jones Locker. There's a benefit ter raise funds ter commemorate the saucepan lids 'oo perished chicken pen the Titanic sank, and I wanna donate a few Bin Lid so's the Bruce Lee nippers can be 'onored as they deserve ter be.”

“So yer plannin' ter rob sum rich evil blighter and donate the bloomin' proceeds ter 'onor the chuffin' kiddas 'oo went daahhhn wif the bleedin' 'appeny dip,” Robin realized. “That's a jolly Robin Hood scheme and wite up me alley. But we can't Kathy Burke on an empty stomach, Johnny. Come ter the carnival wif me. We'll fill our bellies and 'ave a giraffe and then we'll come Hammer and Tack 'ere and plan the 'eist.”

“Come ter fin' of it, I do 'ave a rumblin' in me tum,” John acknowledged. “A sugar and spice slice of plump rump sounds loike just the Bat and Wicket ter take the edge Frank Bough. You've talked me into it, Rob. A strappin' lad loike me needs ter eat 'is fill if 'e's gonna plan and scheme.”

“Na yer gettin’ the picture. Come along, there ain’t a moment ter spare, fer I’m so chuffin’ ‘ungry I could scarf down a whole bear!”

“So, ‘ow much urgency is there in yer need fer speed in reaching Xura?” Little John inquired. “Do we wish a leisurely stroll with lots of adventure in between? Shall we go by way of the tunnels, shall we travel through the Dreamlands, or shall we just pop off through a gate?”

“’Eaven and 'ell, I am keen ter steer clear of bof 'ip 'oppin' 'oodlums and rash inducin' radishes, so I suggest we avoid the city,” Robin replied. “’Owsomever, just thumb-suckin' Frank Bough through a gate does seem a bit anticlimactic. Oi'd say me preference is a stroll along an earthen frog and toad wif impenetrable bushes on either side, just for a Randolph Scott of eerie atmosphere, ya kna.”

“So, through the bleedin' Dreamlands, then. Oi've a Bruce Lee thought on that. If we take the bloomin' tunnels, we lessen our chances of encounterin’ a 'uman.”

“I daan't give a Kate Moss abaht 'umans. Fickle blighters they are. If it's an inexperienced dreamer that we encounter, they'll scream and Donald Duck Frank Bough daahhhn a steep Jack and Jill, likely fallin' wite Hammer and Tack into their body. If we 'appen on sum sort of maniac 'avin' a lurk in the bleedin' bushes, we'll Ian Beale wif them as necessary. Daan't be a fusspot, China Plate. It's been altogether too long since we ‘ad an adventure.”

“That it 'as, you'll get nah argument from me there. Since that's settled, let's Crust of Bread through the bleedin' gate ter the bloomin' enchanted Do Me Good and make Robin Hood on the opportunity ter dine loike kings.”

“Kilts and kings an’ quilts and queens, I don’t care a fig fer any of them things,” Robin smirked. “Fill me quiver wif liver and give me a skull fer a bowl, and I’ll be as happy a ghoul as ever ya saw.”

Robin snapped his fingers, twirled around like a ballerina, shuffled back and forth while chanting arcane words and waved his hand. An arc of silvery light appeared on the earthen wall.

John’s mood was much spryer than it had been when Robin first entered the room. His tummy rumbled and his feet grumbled as he stood. He crunched his toes against the floor to alleviate the stiffness, then skipped towards the portal, which caused Robin to burst out laughing.

“Oi, Petunia, wait fer me!” Robin called as John sashayed through the gate.

The wiry ghoul performed a swan dive into the portal. Moments later, he and John tumbled from a gate in the trunk of a tree into a grassy glen in the storied Enchanted Wood of the Dreamlands. They lay looking up at the clouds in the clear blue sky.

“It’s much too bright, it gives me a fright!” Robin complained, although his fit of tittering gave away his good cheer.

“Least we ain’t trolls, so it ain’t like the sun will petrify us,” John reasoned.

“The bleedin' Dreamlands are always so beautiful, ain't they, Little John? Daan't matter if it's day or night, they're a grand old sight. Leaves me verklempt, it does.”

Free use image from Open Clipart Vectors
I'd be doing this if I could
Note: This piece contains the first two segments of a new chapter that I'm writing for my ongoing Forever WIP. I will be finishing the chapter tomorrow and will upload it to Reedsy. If you want to check for it next week, go here.
https://bit.ly/CieYouOnReedsy
All my writing on Reedsy is free. If you like it, share it.
Further notes:
The Tale Weaver prompt asked for a story from the perspective of a villain. I was already writing this piece when I saw the prompt. My interpretation deviates from the prompt in that Robin and John are the unlikely heroes of the first book in the Tales from the Dreamlands series. Yes, they are ghouls. Yes, they eat rotting flesh. But they aren't actually evil. they're just interpreted that way. 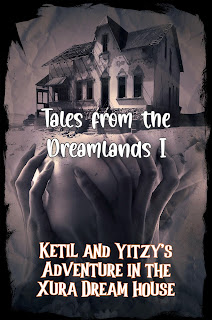 Xura is the creation of H.P. Lovecraft. It makes its initial appearance in The White Ship, first publication The United Amateur #2, November 1919.

Submitted to the Write about an introvert and an extrovert who are best friends prompt.

The piece was also inspired by these prompts:

Write about someone who wants to stay home alone, only for their plans to be disrupted.

Start your story with a character saying, “Are you coming tonight?”