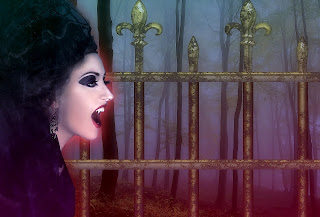 Paraji is not a happy camper right now. I uploaded the manuscript for Carnal Invasion XII: Paraji's Prisoners to Kindle and created a cover using this excellent picture to represent the titular vampire sorceress.
The book showed up on my bookshelf as "draft."
"Well, WTF?" said I.
I tried to go back in and fix things, but I kept getting returned to the bookshelf.
In a state of frustration, I decided to just delete the book from the shelf and start over.
I guess the problem is on Amazon's end because I was told I couldn't do that.
So I kind of want to throw my computer out the window, but that would be counter-productive.
In spite of the fact that sales for these books has been incredibly disappointing, the moment when one gets published is still a good one.
I don't need this shit.
If I could drink, I'd be an alcoholic. Believe me.
Fixed things! I re-uploaded the book. The "draft" version is still there, which will aggravate me, but at least the real version is there too. Maybe Amazon can delete the draft version for me.
The real version is still in review at the moment, but at least it's enough to stop Paraji from breathing down my neck!

- May 25, 2019
Email ThisBlogThis!Share to TwitterShare to FacebookShare to Pinterest
Labels: publication frustration