Tidbit Tuesday: At the End of Everything 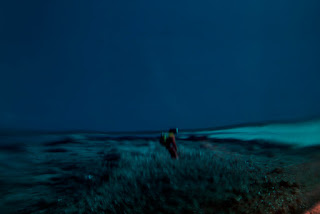 At the End of Everything

All things are interconnected, and yet sometimes it is impossible to find the connection between one thing and the other, particularly where humanity is concerned. Those who are no longer living are able to see the connections better than those still bound to corporeal form.

Those of us who looked deeper into certain connections became deeply unsettled by what we found. Certain forces of evil thought to be long extinct are quite active behind the walls of sleep. I and five other appointed agents were dispatched by King Kuranes of Celephais to explore the Cosmos and discover how we may yet save ourselves from annihilation or, worse, enslavement to these malevolent tyrants.

I followed my research to the dead world of Zecor 6 in the year 3121. Scientists of various races were exploring the planet. The more physically vulnerable among them were wearing protective gear. Being in spirit, there was no need for me to take such precautions.

One fellow clad in such a safety suit was happily humming a zany little tune from my time. This nasty earworm proceeded to give me fits for the remainder of my journey to this foul orb.

Wynona's got herself a big brown beaver and she shows it off to all her friends.
One day, you know, that beaver tried to leave her, so she caged him up with cyclone fence.

"Curse you and your damn zany tune!" I snapped at the scientist. I took my leave of him, for he would not stop muttering those blasted words. I think it was the only part of the song which he knew.
I sensed a strong neural wave, which I followed to what I believed to be a royal palace. There were multiple energies emanating from this structure, some of which were exceedingly malevolent. I tuned out the extraneous spectral static and concentrated on the quixotic emanations which had led me to this place. 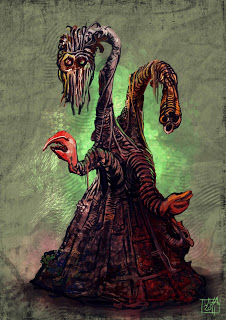 It was here that I saw the creature whose psychic transmission I had been following. I recognized its kind from books studied in both the waking world during my lifetime and in the various libraries of the Dreamlands. It was a Yithian. I was somewhat surprised, for individuals from this race are notorious for their lack of empathy. This particular Yithian, however, was quite empathetic.

"Greetings, fellow explorer," the Yithian scientist addressed me. "I believe that we are here united in a common cause."

"What cause would that be, in your opinion?" I asked.

"You are here to save your kind from destruction, much though a part of you maintains that some of them actually deserve it. I too am here in an attempt to ameliorate the damage that the worshipers of certain baleful forces have wrought. Perhaps your mission has a more personal focus than mine, however, the goal remains the same. As we attend to our mission, perhaps we can share more of our own particulars. I would enjoy that."

"As would I," I said. "You may be able to help me a great deal. My people are far more primitive than yours. However, I sense that you are working alone."

"I am a renegade, different from others of my kind," the Yithian confirmed. "I perceive something from you. There is an emotion in your being which I would like to understand. To compassion I can relate, but this is different from simple charitable compassion. My friend, you are here because of love, and in spite of the terrible trauma you have endured, you still believe that love can save us. Can you tell me of love? For if it can indeed save us, I should like to understand."

"I don't know if I can make you understand exactly what love is," I said. "But I can try. I will tell you of my mission. I will try to impart to you how the love between two souls who needed each other very much may indeed save the entire Cosmos, and this is why certain powerful denizens among the Outer Gods and other malevolent factions wish for them to be kept apart."

"I am intrigued, Human, very much so. If you do not mind, I would like to record your tale."

"Yes, that would be fine. During all of my lives, I have always been a storyteller."

"Then I would be very pleased to help you tell your story. Allow me to make a note. Reference imparted by...what are you called?"

"My name is Ketil Arvid Nagel. I was also known in this most recent lifetime by my stage name, Lord Morbid."

"Then I shall make note of both. Place of origin, the Dreamlands of Sol 3 or Terra. Classification, spectre of homo sapien male in early adulthood. This informational exchange is taking place on planet Zetar 6, also known as Zecor."

"The eye of the hurricane, it would seem. Or one of them, for it occurs to me that this hurricane has many eyes."

"This place was one of the power centers for the worship of the Great Old Ones and Outer Gods," the Yithian said.

"Not a great surprise there. Would you mind if I were to give you a name that I could call you? It seems a bit rude to keep calling you Yithian."

"I am unsure why, for that is what I am. However, I am amenable to whatever makes you comfortable."

"May I call you Yitzy? Perhaps it is silly, but it seems a bit more personal."

"Certainly. Yitzy it is. Yitzy is here to hear Ketil impart a tale of love, and, it would seem, of Wynona and her big brown beaver, whom she loved and wished she had a pair of."

"Forget Wynona and her big brown beaver. This is simply an earworm imparted to me by a scientist who could not cease from repeating that irritating rhyme. My story has nothing to do with beavers. Make yourself comfortable. This may take a while."

Credits:
Earth's Dreamlands, King Kuranes, and the Great Race of Yith are the creations of H.P. Lovecraft.

The Zetar star system is referenced in the Star Trek episode "The Lights of Zetar." Star Trek is the creation of Gene Roddenberry

Notes:
Illsa's wonderful piece inspired us to create a helpful new segment for our adventure. We thought that given the number of subplots, it would be helpful to have a narrator to tie things together. Thus, we are pleased to introduce Ketil Nagel, aka Lord Morbid, as our narrator.

Ketil has previously appeared in other chapters on this blog, including Illsa's piece. His back story includes the fact that he committed suicide at a young age after a difficult life. He was the vocalist and chief lyricist for the Scandinavian death metal band Deadly Night.

By Primus
Wynona's got herself a big brown beaver and she shows it off to all her friends.
One day, you know, that beaver tried to leave her, so she caged him up with cyclone fence.
Along came Lou with the old baboon and said "I recognize that smell, Smells like seven layers, That beaver eatin' Taco Bell!".
Now Rex he was a Texan out of New Orleans and he travelled with the carnival shows.
He ran bumper cars, sucked cheap cigars and he candied up his nose.
He got wind of the big brown beaver So he thought he'd take himself a peek, but the beaver was quick and he grabbed him by the kiwis,
and he ain't pissed for a week. (And a half!)
Wynona took her big brown beaver and she stuck him up in the air,
said "I sure do love this big brown beaver and I wish I did have a pair."
Now the beaver once slept for seven days And it gave us all an awful fright,
So I tickled his chin and I gave him a pinch and the bastard tried to bite me.
Wynona loved her big brown beaver
And she stroked him all the time.
She pricked her finger one day and it occurred to her she might have a porcupine.