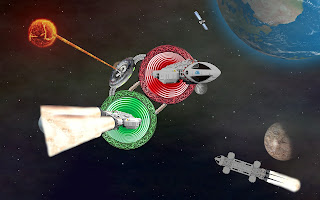 
When the Earth invasion fleet from Gamma Iridon was wiped out by irradiated space junk, there were only two survivors. 110X1 was the spawn of the vice-admiral and 1X0X1 was the spawn of the lead wing commander. The pair were notorious for being exceptionally lazy; when space junk devastated the fleet, they were napping in an escape pod, which detached from the doomed flagship and fell to Earth, landing in a sand trap at Big Putt Golf Haven at the stroke of midnight.

The pod dematerialized ninety seconds after the surprised occupants evacuated. No‐one witnessed the event except for countless mosquitoes, several hundred fireflies, approximately 108 mice, one screech owl, and a young groundskeeper named Gandolph Stafford, known to his gaming friends as Gandy.

The evacuees of the pod initially appeared to be amorphous, transparent blobs. Gandy attempted to stay hidden from them. He was just twenty‐five years old, and he had every intention of celebrating his twenty‐sixth birthday in 172 days. The invaders, however, had far more advanced senses than humans.

Gandy watched as sparks blipped in the forms of the two jelly‐like aliens. He realized they must be communicating with each other. Suddenly, the pair extended pseudopods from their gelatinous forms and reached into the brush, dragging the terrified groundskeeper to them.

The aliens pressed their pseudopods to Gandy’s temples. He could suddenly understand their thoughts.

“Fear not, Terran. We have no intention of consuming you.”

“Oh, good!” Gandy replied. “I...I probably wouldn’t taste that good anyway. My diet isn’t exactly stellar. I’m a bit of a junk food junkie. I could get you something to eat, though. Would you like some ice cream? Oh. You probably don’t even know what ice cream is, do you?”

“We wish to learn of your planet. Teach us what you know.”

“Well, um, yeah, okay, sure. I just need to finish putting everything away. Is that okay?”

“Companion, I believe the Terran would feel more comfortable if we were to assume the appearance of one of his kind,” one of the aliens suggested.

“Yes, I believe you are correct, Companion. One moment, Terran. We are retrieving data from your mind to create a form that you will find pleasing.”

Want more of this short, sweet, and spicy story?

Here's where you can get yours!

Buy it on Amazon for 99 cents.

This story is for mature audiences only.

New chapters are published weekly on LBRY for 1 LBRY token per chapter. LBRY is a form of cryptocurrency. At the time this post was written, it was worth just shy of $0.04. Follow @naughtynetherworldpress on LBRY to get the good stuff cheap every week! Plus get a killer deal on complete books. I plan to sell this one for 15 LBRY tokens.

New chapters come out weekly on these paid subscription platforms:

Get all the details about each platform on this page.