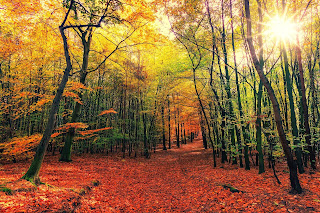 Free use image by J. Plenio on Pixabay

“If winter is death, surely, red-slashed autumn is the wound that brought it,” Robin mused as he sat against the wall of the decaying dream house, remembering the terrible October day in his twelfth year when the girl whom he hoped that he would spend the rest of his life with was taken. “Oh, bloody Fillet Of Cod your useless poetry, Robin Roberts. Ya kna na that the feckin’ Mi-Go took Betsy's brain, but whether they’ve ‘oused it somewhere on Yuggof, or on an outpost orbitin' Orion, or in any other infinite number of places in the Cosmos, I've not been able ter determine.”

Robin rose and meandered aimlessly down the dusty, debris-littered hallway.

“Wouldn't the bloomin' Rum & Coke be on me if the bastards set up Lollipop in the basement of the old Lyon school, or somewheres else in Crouch End, maybe even the abandoned apple cellar at Betsy’s family's Drum, ter store the brains wot they've alf inched from folks?” he speculated. “Oi, but it does me nah blimey Robin Hood ter hang around this hallway. I’ve gotta find me mates. Maybe Rilpu or Yitzy or even Ketil might 'ave an idea of 'a we can trace Betsy's thought patterns.”

Since becoming a ghoul, Robin had preferred darkness. As a ghoul, he relished odors of mold and decay. Robin was not easily startled. Despite his diminutive stature, he was a confident fighter, although not adverse to resorting to dirty tricks when it came to defending himself and his friends. Nevertheless, the atmosphere of the House of Lost Dreams was unsettling to him.

Despite Robin’s occasional hot temper, he was generally level-headed and alert. He had a persistent nature. However, the recent encounter with what appeared to be the spectre of his long-lost love left him undone. The dream house was filled with eerie, mocking shadows proving to be corridors leading nowhere and rooms filled with depraved scenes of unspeakable cruelty.

“You could have saved her, Robin, if you’d just paid attention,” a buzzing voice hissed in his ear.

Robin gazed into a room in which the last moments of Betsy’s life played out. The stranger the pair had met on their journey to school flapped out of the family’s apple orchard. Depositing its ridiculous rumpled overcoat and oversized hat on the ground, the alien revealed its true appearance. It was a pinkish-hued, crustacean-like winged horror with an ellipsoid head resembling a human brain covered in antennae. The creature waved one of its pincers before Betsy’s eyes, and the startled girl became calm. It buzzed words that Robin couldn’t understand, and Betsy agreeably allowed it to remove her brain and place it in a cylinder.

The extraterrestrial flapped its wings and rose into the night carrying the cylinder containing Betsy’s brain, throwing red leaves into the air like a spatter of blood. Betsy’s lifeless body lay beside her house.

“Oh, Bets, the bastard bloody tricked ya!” Robin quavered. “I suppose 'e Pearly Queen ya were someone ever so special and smart, and them Fungus from Yuggof needed yer talents. I didn't know--I 'ad nah blimey idea! If I’d known, I’d ‘ave told ‘em to take me instead and let you stay.”

The original character Robin Roberts is the intellectual property of Naughty Netherworld Press.

Robin, along with his friends John, Ketil, and Yitzy is the star of Naughty Netherworld Press’ novella, Tales from the Dreamlands: Ketil and Yitzy’s Adventure in the Xura Dream House.