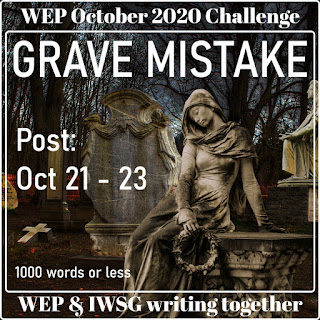 Friends from the End

Robin Roberts reflected on the fact that he had existed in his current incarnation for 146 years. It was early November 2014 last he checked, but he had been through several gates or wormholes since then, and time worked differently in the Dreamlands.

Robin’s body died during the influenza pandemic of 1918 but was revived shortly thereafter by arcane magic. He wasn’t afraid of being in a mass grave with approximately three hundred other victims of the virus. He didn’t need to breathe because his body was no longer alive.

Robin tunneled through the soil as easily as if he were swimming. He noticed another fellow tunneling beside him and the pair grinned at each other, knowing that if they worked together, they would reach the surface swiftly.

The wiry Robin and his burly companion climbed out of the grave on the stroke of midnight. They shook hands and introduced themselves.

“Whistle and pop of the chuffin' evenin' ter ya, guv'ner,” the portly ghoul said. “I'm John Tamboli, and I'm 'eaven and 'ell chuffed ter make your acquaintance. Folks call me Lil' John, and I suppose that ya can clock why. They also call me the tambourine geeza, 'cause I enjoy playin' the tambourine chicken pen the opportunity presents itself.”

“I'm Robin Roberts, and I'm glad ter kna ya, good sir. 'Eaven and 'ell, I guess we bof kna why we're not jack's but are feelin’ frisky just the bloomin' same. I suppose t'was the chuffin' flu that took ya, same as me. “Ell’s bells, I daan't wish ter 'ang 'round this Drum longer than I must. Wot do ya say we pop Frank Bough ter Dylaf Leen and find ourselves a tavern where we can enjoy a pint?”

From that moment on, Robin and John had been inseparable. Whether in London, Dylath Leen, or anyplace else that the ghoul tunnels connected, they made their way through the underworld together. Unlike some ghouls, they weren’t interested in joining a coven or in terrorizing the living. They preferred to unlive their unlife discovering new things and learning old secrets.

Robin carried a secret that he told no-one, not even his best friend. It hurt too much to speak of it. But that night when he looked up at the sky, it looked just as it had on the night that his beloved Betsy had been taken from him, and he blurted out a portion of the truth. From there, John and Robin’s other friends, the snarky Swedish spectre Ketil Nagel, the serpent mystic Rilpu, and Yitzy the Yithian had encouraged Robin to reveal the truth that tormented his soul.

Now Robin was running down a seemingly interminable hall, wishing that he had listened to his friends when they warned him not to follow the phantom appearing to be Betsy, but which almost certainly was not.

The apparition appeared as Robin sat in the living room of the House of Lost Dreams telling his friends the sad tale of how his beloved Betsy was found beside her house with her brain removed from her head and how he and Betsy had met a rumpled-looking man with a peculiar buzzing voice earlier in the day. The phantom looked the way Betsy would have had she been allowed to become a woman. Despite his friends’ protests, Robin leaped up to follow the vision.

“Ruddy eedjit,” Robin muttered to himself as he ran along the seemingly interminable corridor. “Oh, it's a grave mistake I've made, runnin' Frank Bough after a ruddy phantom 'cause it looked loike me Betsy might 'ave looked 'ad she been allowed ter gra up. But it couldn't possibly be Betsy. It's a trick played by that blasted Nyarlathotep, surely, and I fell into 'is trap Ham and Cheesy peasy. Na I may never clock me china plates or that glorious molderin' 'aunch of 'uman or that tasty spiced Porcupine again. You're a two-foot rule, Robin Roberts. a foolish, foolish two-foot rule.”

A dark vortex appeared at the end of the hallway, and Robin knew that he had two choices. He could enter the vortex, which would either spell the end for a body well past its shelf life but with which he was not sure he was ready to part, or it could lead him somewhere that was hardly guaranteed to be anyplace he wanted to go. His other option was to try and find his way back to his friends, but the configuration of the Dream House was not consistent.

The apparition materialized before the vortex, beckoning Robin.

“Ya can't be wot ya seem ter be nah matter 'a much I want ya ter be,” Robin said, his voice quavering. “So ya tell me wot ya 're, damn you, and screw ya six ways ter Sunday for playin' wif a bloke's Horse and Cart in the chuffin' cruelest way possible.”

“I’m your very own Betsy Bowes, Robin Roberts,” the apparition answered. “I chose the form that I thought would make you feel most comfortable. After all, my mind was separated from my body when we were both but twelve years old. I can show you where they took me, dearest Robin, and you are welcome to join me there. My companions agree that your knowledge and compassion would be great assets. What do you say, my love? No longer will you need to feed on decaying flesh to maintain your corrupt body. You can explore the Universe with me.”

“I want so badly fer this ter be real,” Robin whispered. “But if there is anythin’ that I've learned in me Nifty Donkey's Ears of Porridge Knife and me ninety-six Donkey's Ears of unlife, it's that if summit seems too Robin Hood ter be true, it prolly is.”

Robin released the apparition’s hand and turned away, his broken sobs echoing off the walls of the House of Lost Dreams.

Earth’s Dreamlands are the creation of H.P. Lovecraft, inspired by the works of Lord Dunsany.

Robin and John are ghouls, a race of Undead creatures that subsist on decaying human flesh. Ghouls are either born as ghouls or become ghouls following the death of their bodies by the use of arcane magic.

It also utilized the “Apparition” prompt from the October Spooky Writing Challenge list.

The story was submitted to the https://blog.reedsy.com/creative-writing-prompts/ challenge for the Write a ghost story where there’s more going on than it first appears prompt on 17 October 2020.

Robin, John, Ketil, and Yitzy are the stars of Naughty Netherworld Press’ novella, Tales from the Dreamlands: Ketil and Yitzy’s Adventure in the Xura Dream House.

Copyright 2020 by Naughty Netherworld Press
Reblogging is acceptable on platforms that allow it. LBRY’s reblog function is called repost, which makes things confusing since reposting is considered a no-no on most platforms. It’s fine to share the post using the repost function on LBRY. It is not okay to copy-paste the material into a new post.