Shared with me by my friend Ivan.
Which leads to a bit of a funny story.

Ivan is one of the people with whom I collaborate on the erotic stories of Naughty Netherworld Press, along with his cousin Lil DeVille.
If you are interested, you can find out more about the dirty tales of Naughty Netherworld Press here. These dirty stories are indeed done dirt cheap. Each book is between 99 cents and $2.99 U.S.
It was not actually my intent to promote the offerings of Naughty Netherworld Press, but, almost anytime is a good time for shameless self-promotion.
Here is what I was really wanting to talk about.
When people find out that someone writes erotica, they tend to make assumptions that the author of said erotica is a promiscuous person with a brash attitude who seeks out kinky sex. The author is assumed to be hypersexual, their sole focus in life is believed to be sex. If the author has any sort of spiritual focus, they are probably into tantric practices or they are involved in sex magick and probably participate in orgies.
Conversely, some people assume that those who write erotica are all oversexed men with one hand on the keyboard and the other, well, you know.
In fact, in most cases, assumptions made about the real-life behaviors of erotica authors are incorrect.
Many erotica authors, whether male or female, use feminine pen names. The exception tends to be gay male erotica, which is usually written by men.
Erotica authors don't always write according to their sexual orientation. My role is primarily as an editor, but when I am contributing in the capacity of a writer, I am most comfortable writing about homosexual interactions, whether male or female. In real life, I am straight. In practice, I am celibate and have no interest in having a romantic or sexual relationship.
Lil is pansexual. She is currently not involved in a relationship and is not actively looking, but she is keeping her options open. She enjoys writing about open relationships and group sex, but, in real life, has no interest in either.
Ivan is gay. He likes writing about wild man-to-man sex, the more the merrier. In real life, he is shy and monogamous.
Americans have very puritanical attitudes about sex, which leads to wild speculations about anyone who writes about sex. People and sexual behaviors are nuanced rather than black and white, and just because a person is fascinated by a fantasy does not mean they are interested in acting out that fantasy in reality.
I am a person who deeply dislikes casual sex and finds it detrimental to my well-being. In most of my writing, my major characters tend to be monogamous. While relationships develop in the erotic stories that I contribute to, there are hook-ups everywhere and everybody is D.T.F. at the drop of the proverbial hat. It's hyperbolic, and it's all in fun. Swinging space aliens are taking over the world, while vampire vixens, wanton werewolves, and other creatures of the night get busy making sweet...music. The only thing that can really be discerned from this is that my cohorts and I have active imaginations and are, perhaps, a bit silly. Our stories are merely an escape from reality.
The idea that people who write erotica are all spiritually stunted horndogs is, frankly, insulting.
The shy, soft-spoken young gent who shared the above video with me is anything but spiritually stunted. He is a deeply caring and compassionate person who is faithful to his boyfriend and who happens to enjoy writing very dirty stories with a wicked sense of humor.
Pushing away from puritanism does not mean that everyone needs to be D.T.F. or always on display. It means that we need to realize that sex is a part of life, that different people have different attitudes about sex, that not wanting sex is as normal as wanting sex, that many people prefer monogamy but some are not wired that way, and that it is not a "sin" to not be heterosexual.
Sexuality is a spectrum, and sexual interactions can sometimes be spiritual.
The most important factors in the equation are respect and communication.
That being said, let us watch the video that Ivan shared with me. We hope you enjoy it. 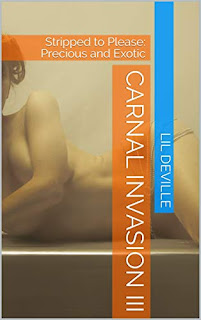