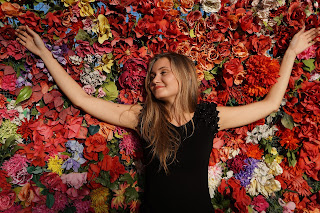 Adorable Wella Mack is a sweet, fun-loving young woman who likes to make everyone around her happy. At the point when Wella's mother married Maxwell Bancroft's father, Max was an immature and self-centered young man whose only purpose in bedding Wella was to rack up another notch on his bedpost and congratulate himself on deflowering a virgin.
Max did not intend for his innocent and amorous new stepsister to become pregnant, but that is exactly what happened. Max' father insisted that his son behave responsibly. Even if Max had no intention of marrying Wella, he was expected to provide for the child he had helped conceive.
Following a frustrating session with his college admissions counselor, Max found himself at Mistress Kali's exotic dance club, where he met the lusty Gamma Iridian strippers, Krystal and Jewel. He brought the pair home with him to serve as bodyguards and future nannies for Wella, who quickly became quite enamored with the affectionate aliens.
After Mistress Kali brought Wella to her lair in order to impart special powers to her new offspring, Wella met Katherine, a sweet young Norwegian woman whose British paramour, Harold Groves, seemed to be a mirror image of Max in his narcissism.
Wella and Katherine fell in love, and, to their surprise, Harold and Max not only fell in love but became mature and responsible, happy to care for the children they had sired.
Wella gave birth to Valentine Rose, an elemental hybrid whom she refers to as "the embodiment of friendship and love." Katherine gave birth to Charm, an Earth elemental with the ability to imbue minerals with magical powers and to manipulate earth and stone.
Further adventures await the seemingly ordinary Wella and her extraordinary family.

"I’ve always wanted someone to love me best of all, but I know that I’m just a plain little mouse, and I’ll always be second best.” --Wella Mack