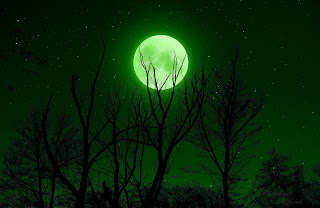 Image by Syaibatul Hamdi from Pixabay

the moonlight moving
across a traumatized sky
above a dead world

notes
I have not been well. My diabetes has decided to behave in a more completely shitty fashion than it had previously done, so not only do I find myself dealing with the frustration of contending with this garbage condition, I find myself mired in self-loathing because I learned at a young age that anything shy of physical perfection was a personal failure. I will say with unflinching honesty that if it weren't for the fact that I still serve a purpose in assisting my son, I would punch my own ticket. I realize that suicide ideation is an uncomfortable subject, but please refrain from the blah blah counseling blah and blah blah medications blah rhetoric. Counseling doesn't help, and psych meds cause me to become manic and psychotic, two things that I, shockingly, don't enjoy being.

This poem describes the dead world of Zetar 6 (Zecor), a key player in the Fetch Universe. Fetch is Team Netherworld's flagship story, which was born in early November of 2014 when I was working at the retirement community where I would work for close to 11 years. The idea was born when I learned that someone who had meant a great deal to me for many years had been diagnosed with Alzheimer's disease. This person was only 55 years old at the time of diagnosis--the same age that I am now.

In my shock and grief, I walked through the vast retirement community and was prompted with the idea of finally starting a project that I had envisioned taking on for close to forty years. I had always wanted to write a backstory for the Lights of Zetar, a Star Trek episode which has been universally panned by critics and which has its problems, but has, nonetheless, always fascinated (and scared the bejeezus out of ) me.

The inspiration to finally begin this project and to incorporate it with my beloved Cthulhu Mythos came from a mind other than my own. I will not go into detail except to say that this inspirational individual was noncorporeal, and you can think whatever the hell you want about that, I'm not going to argue with you. I refer to this presence as Gem, and I am deeply grateful to him for the gift he gave me. I am saddened by the fact that when I am gone, the door to this world will close. No-one enjoys my work, and I am well aware of that. My writing style is entirely unappealing to most people, and my personality even more so.

I love you, Gem, but sometimes I am not sure if you possess much in the way of good sense. If you did, you surely would have chosen a scribe who was less of a complete and utter train wreck of a human being to be your co-conspirator.