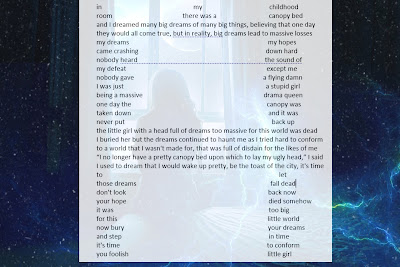 I was experiencing massive frustration in trying to get my shape poem, The Canopy Bed, to conform to Kindle Publisher's format and all fit on one page, even after I reformatted the page in Word and shrank the font. It occurred to me that I could take a screenshot of the shrunk-down version of the poem. I simply pasted the screenshot into MS Paint and saved it as a JPEG.

The poem looked a little bland all on its own, so I found an image on Pixabay. I then opened the image using Pixlr's free image editor (http://pixlr.com) and layered the poetry JPEG over the top, increasing the poem's transparency. I also added a "dust" effect that I felt enhanced the image.

I don't get squat from Pixlr for telling you about them, except for the satisfaction of sticking it to Adobe for their skeevy ways. I feel that even the free version of Pixlr is a strong competitor for Photoshop, and I don't have to pay a monthly subscription fee to use it. Having a competitive free version of their software available for broke-asses like me makes Pixlr the good guys and gals of the digital art software world, while Adobe are the sketchy, mustache-twirling villains tying broke digital artists to railroad tracks by putting evil DRM in the software that these poor souls paid big bucks for.

Planned obsolescence is a sleazy game of dirty pool and I don't like it. So, if I ever do start making money off my work, I will purchase the paid version of Pixlr, and Adobe can go lick a cactus, right alongside of Apple. My iPhone 7 decided to go tits up yesterday morning, with no warning signs such as the battery not charging as quickly or not holding a charge as long.

I had always piggy-backed the phone onto my computer with a lightning cable, and it worked fine and dandy. Sometimes if the computer went to sleep, the phone would stop charging. This is what I figured had happened when I found the phone lying on my computer desk dead this morning. No big, I thought. Now that the computer's awake, the phone will charge back up.

I took the phone out to the car to try and give it a quick boost from the car charger, which usually wakes it up in less than a minute. It was still unresponsive. So, I brought it inside and plugged it into a wall outlet to charge. Nothing was shaking. My son took it up to his room to charge it on his wireless charger. It remained dead, so we called the time of death for the damn thing at about 12:30 PM, and I ordered a Samsung Galaxy 10 that I'll be paying off for the next two years. Except for iCloud, I've had it with Apple.

This image fits in the book, but I realized that it might be difficult for some people to make it out on their tablets, computers, or smartphones. So I decided to create a web version and include a link in the book.


The new book is called Poetic Pandemic and it is due for release in the second week of May. You can wait for the free promo announcement shortly after release, and pick up a copy then. As I always say, free is my favorite price.

In the meantime, if you haven't already grabbed your copy of my first poetry volume, Another Autumn, why not check it out now? It's only 99 cents, which is pretty close to free. Or, if you have Kindle Unlimited, you can borrow a copy.

Here is your handy link. https://amzn.to/3aExYT5

Now you can't say I never gave you anything. I have just given you a fantabulous digital picture and a link to some ornery poetry. What more could you want, except, you know, to win the lottery or something like that?

And now for the acknowledgments and legalese blah-blah

The background image behind the words is copyright Ajay Kumar Singh.
https://pixabay.com/photos/planet-lonely-spark-night-universe-4848364/

Contents of the poem, the transformative image utilizing the poem, and this explanatory post are copyright 2020 by Cara Hartley

Sharing a link to the poem is acceptable.

Quoting portions of the poem for educational or review purposes is acceptable if proper credit is given.

This poem is published on the following sites: