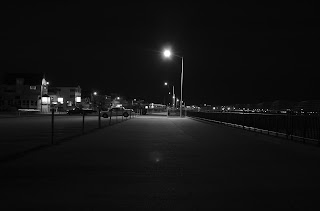 One by one the lights of the city block winked out, the dark coming ever closer. Daniel Clifford regarded the oncoming dimness with disdain.

“You think I give a rat-fuck if this shite storm tears this fuckin’ city apart?” he sneered. “I’ve fuck-all to lose. Fucking garbage hand I was given with this achy-breaky-shake-and-bakey brain of mine. Should the forces of evil invade, I’ll lay down me life with nary an ounce of qualm. Come on, you rat fuck sons of bitches, you call this a storm? Ain’t like it’s anything close to a typhoon or a monsoon. I want to see the end of everything. I want to be under the sea. Darling, it’s better down where it’s wetter, take it from me.”

As a strong gust rattled the windows, the power went out. Daniel rose to part the curtains fully. He heard his sister give a cry of surprise downstairs and snorted derisively.

“Don’t be a dizzy cow, Amber,” Daniel sighed. “It’s nothing but a wee zephyr, an innocent tempest wafting in from the ocean. A whiff of a whisk, a gale in the dusk, the breath of the ocean bringing the musk of the briny to the shore. A little more violent than the average breeze is this ill wind from the savage seas.”

Since the computer was without power, Daniel found a pad and paper to write down the words that came to his mind, sans the part about Amber being a dizzy cow. As he finished scribbling in the low light, his eye fell on a statuette on his desk.

Daniel ran his finger over the long, dark hair and angular face of the figurine made in the likeness of his father, Gerry, at thirty years of age. This was the Gerry Clifford that most of the world knew; the underrated genius behind Mainline, a latter twentieth-century blues-rock band that was either famous or infamous depending on one’s perspective. The elfin guitarist had an intense expression on his face. Daniel smiled, and a tear ran down his cheek.

Daniel was glad that his father hadn’t lived down to the reputation that many musicians had of being philanderers unable to keep their fly zipped whenever a willing female offered them a romp. It pleased him that groupies found his father tepid while reporters branded him as enigmatic. Had Gerry Clifford been their only source of sustenance, the tabloids would have starved, and the world would have been a better place for their demise.

“I hope you know that you were always a hero to me, Da,” Daniel said softly.

“Under the Sea” is a song from the 1989 Disney motion picture The Little Mermaid.

Mormo is the creation of H.P. Lovecraft. She appears in The Horror at Red Hook, first publication Weird Tales, January 1927.

Nyarlathotep is the creation of H.P. Lovecraft, appearing in his 1920 story of the same name.

Submitted to https://blog.reedsy.com/creative-writing-prompts/ on 14 September 2020 for the Write about a character arriving in a place unlike anywhere they’ve ever been prompt. Also inspired by the Write a story that feels lonely, despite being set in a packed city and Set your story in a place with extreme weather, but don’t use any weather-related words to describe it prompts.